You need to have the Flash Player installed and enabled to listen to the jukebox. 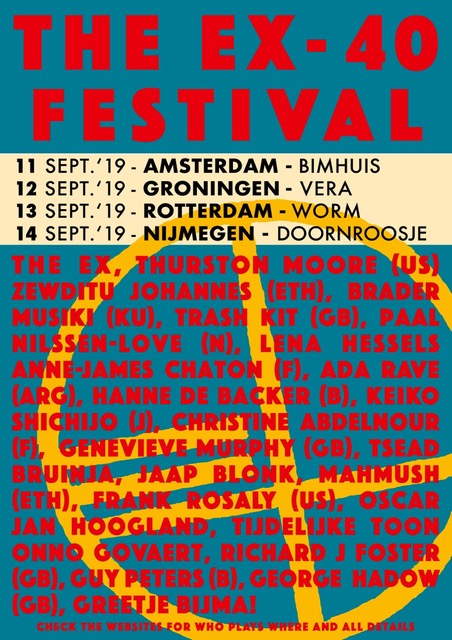 The Ex exists 40 years this year!

We start off the year by celebrating The Ex and the Ethiopian connection. Four special concerts of The Ex with the amazing Fendika music and dance group and the Circus Debre Berhan, the incredible youth circus from the city north of Addis Abeba. 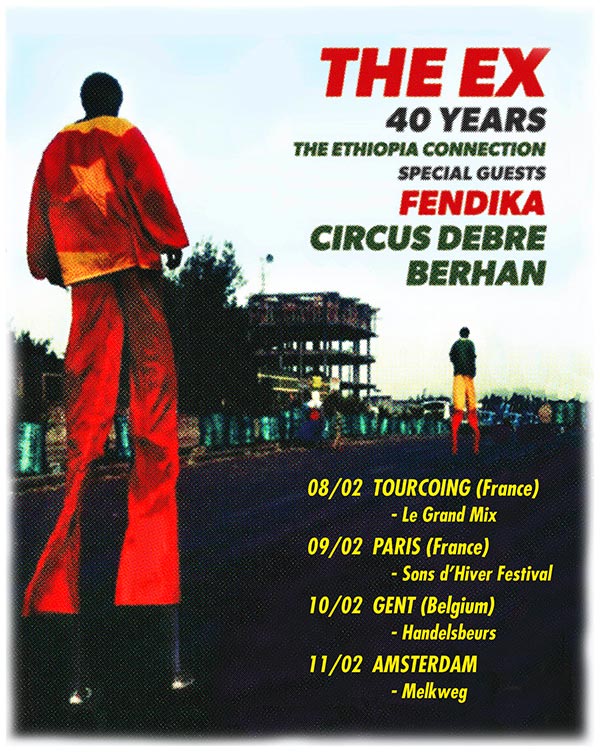 As part of the 50th anniversary celebrations of Paradiso, the venue will be filled with diverse, stubborn and crackling music, all handpicked by The Ex from artists they've worked with in recent years. 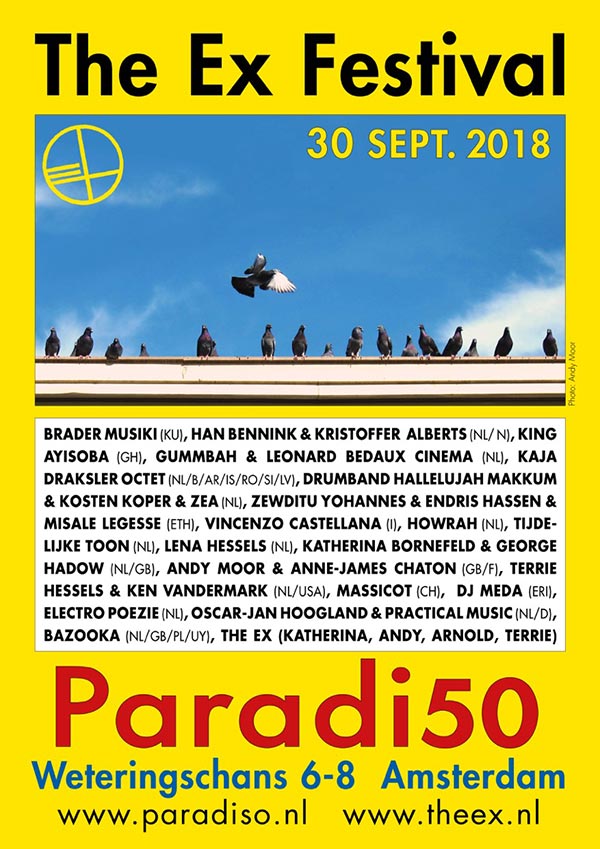 Our latest video clip — "Soon All Cities" from 27 Passports.

The Ex's new album 27 Passports is available now from ExMailorder in LP and CD versions.

And already the best news of this year! A new The Ex album will be released March 22. It's called 27 Passports. We made a new set earlier last year, played it live a few times and recorded the music in three days last october at Electric Monkey in Amsterdam. It's mixed and mastered and already at the pressing plant. 10 Songs and a 36-page photobook by Andy. We can't wait to put it out! OK, you can get it, in about three months from now.

“We always start from zero when we make a new album. We enter the rehearsal room with a few loose ideas, a riff or a beat and see what happens. There is always the risk that it doesn't work out. That risk is part of our music and of our lives.”

"The Ex released their previous regular studio album as a 4-piece (Catch My Shoe) in 2010. While that might seem like a long stretch, their schedule since then tells you another story. The band also released a second album with Ethiopian legend Getatchew Mekuria, and another one with Brass Unbound, featuring several of their friends from the realm of free improvisation. On top of that, there were also a few 7″ split-singles, several phenomenal birthday festivals and a lavish photo book that was published as a tribute to the late Getatchew Mekuria in 2016.

But now there’s new music. 27 Passports contains 10 songs. Two of these (“Soon All Cities” and “Four Billion Tulip Bulbs”) have been a part of their set for a while, but the others have only recently been road-tested, right before the four of them returned to the studio to capture that unmistakable “Ex energy”. The three-pronged guitar approach is still as exciting as ever, with the guitars of Andy Moor, Terrie Hessels and Arnold de Boer creating tense, interlocking webs of connections and drummer Katherina Bornefeld pushing the band with dancing, hypnotic patterns.

There are some remnants of their African adventures, but most of all, this is a return to the power of The Ex as a unit that effortlessly juggles noisy/disjointed guitar parts, trance-like grooves, defiant chanting and a relentless, infectious drive. Colourful and fierce at the same time, 27 Passports once again expands their horizon and enriches their sound, while remaining true to the core of their philosophy: Forward In All Directions!”

The Ex organises a special evening in Addis Abeba, dedicated to Getatchew Mekuria, who passed away exactly one year ago. The presentation of a 170 pages photobook; the opening of a photo exhibition and a tribute concert by several Ethiopian musicians and Norwegian big band Large Unit.

From the beginning it was the aim to make the book available in Ethiopia for an affordable price. We are very happy to announce it will be for sale in Addis Abeba’s best bookshop, Book World, for 250 Birr (±€10). It will also be for sale at the Alliance presentation.

The photobook is the result of what appears to be an unlikely collaboration between Dutch underground band The Ex and Ethiopian saxophone legend Getatchew Mekuria. The Ex fell in love with an old Getatchew cassette from 1972, and in 2004 they wanted to invite him for their 25th Anniversary Festival. They went to Addis to find him and when they met, Getatchew was up for it right away. He came to Amsterdam and it worked from the very start. Getatchew was so excited that he wanted to play more with The Ex and record together: “I want you to be my band!”. His musical life was resurrected. The result was a fruitful 10-year collaboration with more than a 100 concerts worldwide, plenty of enthusiastic press and two beautiful CD/LPs - Moa Anbessa (2006) and Y'Anbessaw Tezeta (2012).

In 2014, because of diabetes, he developed serious problems with his legs and couldn’t travel anymore. The Ex at that point decided to organise a Celebration of Getatchew Mekuria concert series in Ethiopia, including a concert in the National Theatre in Addis Abeba. It sold out. 1500 people came and there was a standing ovation. A truly honourable farewell to a great musician. Soon after this, his health began to deteriorate quickly and Getatchew passed away on April 4, 2016 at the age of 81 after a musical career of more than 68 years.

As a final tribute The Ex has published this photobook. It has four sections of pictures; a selection from Getatchew’s private album with historical photos and photos by three very different international photographers - Andy Moor, guitarist in The Ex, Matías Corral and Nick Helderman who came on tour in Europe, America and to Addis Abeba - to document the career of this legendary musician cumulating in his unique collaboration with The Ex + Guests.